What would you like to see happen in the sequal to 'The Broad Way'?

I am working on an outline for the sequal to 'The Broad Way'. It will be called 'The Narrow Way'.

Is there anything specific you would like to see covered in the next book?

Email ThisBlogThis!Share to TwitterShare to FacebookShare to Pinterest
Labels: next book, reader input

A word from Barbara Henderson 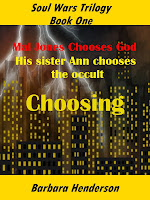 on writing ‘The Broad Way’ The book is now titled 'Choosing' - Soul Wars Trilogy book one and is available on Kindle. I chose the title 'Choosing' because in this book Mal and his sister Ann/AJ choose the paths they walk in life. Mal becomes a Christian and AJ follows the occult.  Book two is 'Walking' because they are following the different paths they have chosen.  Book three is titled ' Staying the Course'.


One day two characters got into my mind and they simply would not go away. No, they were not some sort of spirit guides or beings from another dimension. They were just figments of my own over active imagination. However, they just wouldn’t go away. They were peskier than a line from a song that occasionally would get stuck in my head. They were brother and sister. The brother, who I named Malachi but shortened to Mal almost immediately, was definitely the type of guy strong Christian women are looking for. The sister, Ann or AJ, was definitely the narcissistic type of woman that would need and equally narcissistic man. Mal and AJ really couldn’t possibly bond in the context of family or siblings, because they were going in completely opposite directions. These characters were impossible to get rid of. They just kept floating around in my head until I decided to write them down on paper.

However, just writing a few thoughts on paper didn’t exactly turn into a book. I tried to write the story, but I just couldn’t get it together. I finally went on to something else.

Next, angles got into my mind and wouldn’t leave. Not literally of course, just thoughts of angels began to float around in my head. I divided the angels into two groups. First, I thought of the angels who stayed with God when Lucifer led the rebellion in heaven. Then I thought of the angels who followed Lucifer and fell from grace. The Bible tells us that the angels of God are real and do many things. There are messenger angels, herald angels, and warrior angels. Elijah the great prophet even had an angel cook to help him when he was in need. Today, we speak of guardian angels causally, but they are real.

And, as real as the guardian angels are, there are also angels of darkness who try to influence people to follow their example and rebel against God.

The study of angels was interesting for a while. I made notes in my notebook along with the notes on the brother and sister who were in conflict. But, eventually I went on to something else.

The next thing on my mind was how complicated the world seems to be. There seemed to be no clear way to discern right from wrong. The answer to every question seemed to be obscured in the ‘gray areas’. I began to understand that the gray areas were really like the unnecessary elements in those horrid math problems the teachers loved in grade school. The key to solving the math problems was to eliminate all the unnecessary information. Then the problem usually had a clear solution. I realized that was the same way to discern right from wrong in everyday life. This applies to the seemingly complicated situations we face . It turns out there are no circumstances that give anyone the right to do something wrong. I wrote all this down in my notebook.

Then one day I began to read my whole notebook. Mal and his sister AJ still seemed like good characters. Invisible angels interacting in everyday life was still intriguing. Choosing right and wrong by eliminating all the gray area was still the right way to go. (I love it when I re-read my notebook and it all still makes sense.)

It seemed like I had three books going instead of one. I thought I better pick one subject and just write the book. Instead, I put it off a few more days. I gradually came to realize that all three subjects should be handled in one book.

The main characters in the book are still Mal and AJ.

To the main characters, I added the element of unseen angels influencing them and guarding them. It was somewhat eerie when I began to consider that there really are angels around us all the time even though we can’t see them. I prayed for more guardian angels for myself and my family.

I decided against muddying the story by providing too much gray area in the actions of the characters. In writing this element of the story, I personally gained a little skill in cutting through all the unnecessary information and circumstances that sometimes confuse our decision making process.

A lot of time and effort later – there was a finished product.  Well, at least book one was finished!  Now book two is finished, and the final book is more than half written.  Time flies when you are having fun writing!

Writing the book was work, fun, and thought provoking to me as a writer.

I hope you will enjoy reading ‘Choosing’.

After you read the book, I would like you to consider going back to the web site where the book was purchased and leaving a kind review of the book.

I just want to say thanks to all of you in advance.

Other books by Barbara Henderson 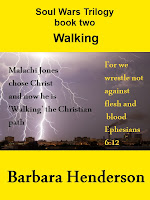 Beginning five years after book one (Choosing) in the 'Soul Wars Trilogy' Malachi Jones is still at war with his sister AJ because of their different beliefs. Mal is a committed Christian who is attempting to walk in the paths of righteousness. AJ is committed to herself. She seeks and follows the advice of her familiar spirits Cabiri and Zisa. When Mal and AJ’s father Frederick has a massive stroke Mal has to admit his failure to pray for his family while fighting for his father to have proper medical care. 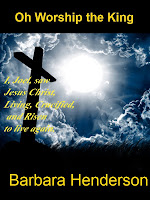 A manuscript from the time of Jesus Christ is found on an archeological site in modern day Iraq. The manuscript contains the eye witness accounts of four different people who followed Jesus during His time on earth.

Elizabeth Newton, a widow, is on an archeology site in Iraq when the copper manuscript is found. Her life is changed as she translates the manuscript.

As Elizabeth faithfully translates the manuscript she comes to know Joel, Abby, Benjamin, and Judah who followed Jesus during His time on earth, and how they came to worship Jesus as the King of kings.
Posted by Unknown at 1:02 PM 1 comment: